MY LETTER TO TATA MADIBA MANDELA 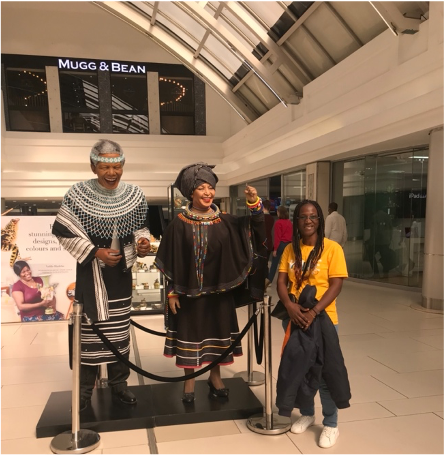 Let me call you Madiba because this name, which means Water in a language of my country Cameroon, speaks to me a lot.

The first time I heard about you, I was a child in class 6 (last year of primary school). My teacher at the time, Mrs. ESSOMBA, from the public school of Bastos, told us at length about you. You weren’t in the school curriculum, but she told us that the questions asked during the exams could also be about daily news. Although I only spoke 3 languages (Eton, Bassa and French) at that time, the Cameroon Radio and TeleVision show entitled « The World this week » presented by the beautiful journalist Anne Nkwain Nsang (RIP), hooked me. The trailer had many pictures of you, your arrest and the struggles of the South African population. My teacher, to explain to us what apartheid was, showed us as a situation where a visitor arrives at our house, we welcome him well and, in return, he enslaves our whole house (father, mother and children), then our neighborhood, our village and our country, forbidding us to access what was rightfully ours before he came. Not happy with this injustice, fathers and mothers from all sides rises up to put an end to it. This is how families choose a person who will take the lead in the struggle, and that person in South Africa was you, Madiba.

Me, the little Cameroonian girl who had watched the movie Kunta Kinte in tears, was infinitely revolted, angry because apartheid was a contemporary story.

Then came the moment of the big announcement on the media: you were going to be released, on February 11, 1990. This day, which is the day of celebration of youth in Cameroon, was a special moment. On TV, we had the parade of young people in Cameroon and your release from prison, under the music of Sam Fan Thomas whose title « Mandela », denounced your arrest. In me I thought, all fathers and mothers in South Africa should be proud to see that their struggles have had a happy end.

I went to the secondary school and then, the media announced that you were going to become president. So, I told myself, the time for revenge has come. The victim must become the executioner and avenge all blacks in the world of slavery, colonization, genocide, racism, discrimination, segregation, apartheid, etc.

During your brief visit to Cameroon on the occasion of the Organization of African Unity summit in 1996, I wanted to go out to welcome you, to see you in real life, since my parents’ home is right next to the Yaoundé Convention Center, where the summit took place. Unfortunately, this was not possible and I told myself, when I grow up, I will have the means to come and see you on the spot.

I was waiting to see revenge, but no, you put on the table, another speech: the rainbow nation, the acceptance of all, the Ubuntu. The myth that you were to me had just fallen into my esteem. I no longer admired you, I suspected you of collusion with your executioner. I thought to myself, what if the dream of Madiba was just to become president, to fill his pockets and basta, ignore the pains of all the victims of South Africa? And I observed remotely how you did politics. I didn’t know much about it, but it seemed acceptable to me.

The benefits of your notoriety

Africa hosted for the first time, the World Cup, I thought your name alone had played a big role on this unprecedented decision of FIFA. What a surprise, it is a Cameroonian song, accidentally covered (that’s my feeling) by a Colombian singer who will be the official song of this great world meeting in South Africa: I am talking about Waka Waka who covered excerpts from a song by the group Zangalewa. How beautiful it was, this party, even if you seemed very tired.

When you died in 2013, I still blamed you and would have like to come to your funeral. Without financial means, I could not make it, but was impressed by the number of personalities from all over the world who paid tribute to you. In my opinion, you deserved it.

In 2015, I came for the first time to South Africa and my contact with my South African brothers, my personal observations of each other, the environment, … made me understand your choice: you refused chaos. Yes, I agree with you, this blind revenge I wanted, could have led to chaos in South Africa and the whole Africa. At that moment, my heart calmed down, I listened again to your speeches on the rainbow nation, on Ubuntu and I reconciled with you. I have come back to South Africa several times, first because it is one of the 05 countries (South Africa, Nigeria, Kenya, USA and South Korea) that I dreamed of visiting since I was a child. And each time, I tried to connect with you, without success.

On July 2022, for the 6th time, I returned to South Africa and there, the connection took place, thanks to PMI, an organization whose motto is « Good things happen when we get involve with PMI ». My brothers from PMI South Africa, during the Mandela Day, organized social activities for us. In your memory, we planted trees and vegetables (we were told that it’s a cause that was close to your heart), I had the privilege of saying a small silent prayer for you by planting my 1st tree, I stirred your land, I watered and I felt your presence. I saw you watching us in a ray of sunshine, I felt useful and happy.

In the evening, we went to Soweto, a place I wanted so much to visit! We walked into one of the towers and enjoyed some local food, a delight! My best meal, since I’m coming in South Africa. We danced African dances and came back with incredible memories. I hope that I will have the privilege of visiting your grave one day and that I will exchange with your direct descendants and your fellow fighters.

These activities finally helped me to let you go. Yes today, I can finally say that I have mourned, I accept to let you join our ancestors.